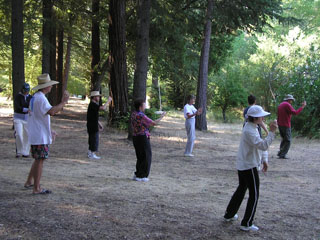 Dating back to the 6th century AD, the Longevity Tree Form is part of the tradition of the Nam Hoa Temple. The exact place of origin is unknown, but it was commonly thought to have come from Tibet.

The Longevity Tree form is about the development and use of chi (life force energy). The basis of the practice is balancing and harmonizing the three energies: ourselves, the earth and the cosmos. Each image in the form is a progression of transformation which deepens our understanding regarding the spectrum of chi.

Some examples; After grounding ourselves in wu chi, we begin with the movements of a tree, the symbol of life, stability and longevity. Then we have the image of the dragon, which is expressive of benevolence and expansion while still deeply rooted. The heart movement awakens our sense of compassion for ourselves and others. Yellow leaves falling and the section on clouds remind us of impermanence and how it functions in the cycle of life. As we accept change as the basis for life, our ability to let go and live more in the present moment is greatly enhanced.

We get the feeling of an evolution taking place as the poetic language moves us from one aspect of nature to another.

At the Nam Hoa Temple was a monk who was called the “one form monk” because he only did the Longevity Tree form. He felt it had all that was necessary to balance body, mind and spirit. It is said the monk left the temple when he was seventy-five on a pilgrimage. Over thirty years later he returned and was still practicing only the Longevity Tree. Suffice it to say, the form has proven itself.

Qi Gong is grounded in several thousand years’ experience in the cultivation of vital energy. One may say that Qi Gong is the mother of the more well-known practice of Tai Chi. Qi is the basic energy of the universe. We are the microcosm of chi, the universe is the macrocosm. Gong means to work with intensity and discipline in a particular area of endeavor.

Based on the interplay of yin, (contraction), and yang (expansion), Qi Gong stimulates the system of energy throughout the body. Through a variety of movement sequences, Qi Gong gives the practitioner the means to balance mind, body and spirit. When there is harmony between yin and yang, we maximize the potential for mental health and tranquility. The understanding of this concept is rooted in theory and practice. The practice is intended as a daily routine.

With a little discipline, benefits will soon be realized. These benefits include: calming the mind, reducing stress, strengthening the immune system, increasing lung capacity, toning the body, and weight control through body awareness.

Longevity Tree is a form of Qi Gong. I learned from Tai Chi Master Kinh Nguyen. He had the good fortune to study from an early age at the Nam Hoa Temple in southern China.

This form is a complete practice. It is designed to move all of the body, internal and external. In this way, the channels of energy within the body remain open and balanced throughout our lives. In my many years of practice, I have found the Longevity Tree form to be one of the most beneficial. With patience, practice and perseverance, I believe it will be of great value for you.

THE NAM HOA (Flower of the South) YANG APPLICATION FORM

This form is a condensed version of the original Yang family Tai Chi Chuan form. This practice was adopted into the Nam Hoa Temple Internal Arts system sometime in the early twentieth century.

As an “application” form, each movement is intended as a method of self-defense. The form is based on techniques that require careful study, in order to understand their deepest potential. In contrast to the Yang Energy form, Yang Application is very precise in the way it directs the chi. Each movement has a self-defense use, and the chi needs to be directed and linked in the most productive ways in order to maximize the power of each movement.

We learn to use the dynamics of the kua, or pelvic girdle, and the dantien* as they work in unison with the legs, the earth, and the projections of chi through the hands.

Chi is the basic energy of the universe. We are the microcosm of chi, the universe is the macrocosm. There are two sayings that exemplify the use of chi in the Yang Application form. “Mind moves the chi, chi moves the body,” and, “When one part of the body moves, all parts move.”

The best method of self-defense is to defuse a hostile situation before it becomes physical. A calm presence of mind, deep listening, and loving speech are powerful tools in dealing with the seeds of anger and violence within us, our families, our communities, and society.

- Jim Scott-Behrends
*dantien: considered to be the body’s physical center, located about 3 inches below the navel; also the area where the chi (energy) is stored.

In Chinese cosmology, yin energy is represented by the image of a white tiger. In the Nam Hoa Temple Tiger form, we establish our connection to the earth, (yin) and we find an excellent means to ground and center ourselves. This form is more of a physical form, as we put more emphasis on the strength of the legs, and the opening of the upper body. The kicking positions challenge our balance, and reinforce the importance of centering, both physically and mentally.

As we go deeper in our practice, we understand our energy connection to all aspects of nature, including animals. If you have the opportunity to observe cats, that will be helpful, as most of the forms in the internal and external arts use animals as their inspiration.

Our task (and enjoyment) is to integrate the insights offered in the forms into our daily lives. This is the true practice, and the intention, of the Nam Hoa tradition. We are being invited to live in the present moment, with peace and clarity.

This form provides a practice which complements the other Nam Hoa forms. In China, the dragon is considered a representation of yang energy, and the dragon form expresses this quality in its expansiveness and dynamic fluidity.

As with the other Nam Hoa forms, the Dragon form is connected to the five elements (air, water, wood, fire and earth). The element for the dragon is air, which corresponds to the lungs.

Each of the Nam Hoa forms are designed to aid us in the transformation of unbeneficial energy. In the Dragon, this transformation can take us from sadness and depression, to acceptance and gratitude.

Dragon can be performed at a medium pace or can be performed in a fast and vigorous fashion. At a faster pace the form provides a challenge to our agility, and cultivates the ability to let go of thinking, and enter into a state of flow.

The practice of Tai Chi Chuan is sometimes referred to as “the flow of a river,”so it is only natural that the element for this Tai Chi form is water. The nature of water is soft and yielding, but as we can witness in the dynamics of a wave, water can be quite powerful.

Within our bodies, as we practice the form, we can generate an exponential flow of energy through our synchronized and unified movements.

The practice of Tai Chi Chuan is also referred to as “moving meditation”. In the Nam Hoa tradition, we seek to cultivate a deep level of mindfulness and concentration as we execute the form. In this way, we aspire to maintain a level of awareness that keeps us connected to the present moment.

The Nam Hoa Yin Yang Form is an exploration of the interdependence of opposites. The interplay of yin and yang within the form is demonstrated through hardness and softness.

In each of the forms in the Nam Hoa tradition we can see the succession of Yin and yang qualities such as contraction and expansion as we proceed through a form. This is emphasized by a focus on relaxation and tension. The yin yang dynamic is founded on the skillful art of bringing balance and harmony into our lives.

We are invited to live in the yin, and know the yang. This means to live in a state of ease and relaxation, but to know when to act clearly and directly. The ideal proportion of yin to yang is like the broth of a bowl of soup (yin) to the amount of salt (yang) added for flavor.

In this form we are invited to directly experience the interplay of the yin and yang dynamics.

As with the other Nam Hoa forms, the Yang Energy form promotes the synergetic qualities of mind, body and spirit. It cultivates our sense of unification with ourselves, the earth and the cosmos. As we increase the potential for chi development, we can stimulate inherent chi, dispose of stagnant chi, and permeate the body with potential chi.

This form is meant to be enjoyed as moving Qi Gong. As the skills of mindfulness and concentration are honed, each movement becomes an opportunity to live deeply in the present moment. As our practice ripens, we come to understand the saying, “The mind moves the chi and the chi moves the body.”

Training DVD’s to support your Tai Chi/Qi Gong practice are available for the Energy Workout and all the forms in the Nam Hoa System. Contact Jim Scott-Behrends to purchase DVD’s at jsbehrends@aol.com. For email inquiries please include “Purchase DVD” in the subject line.